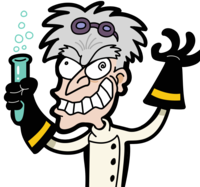 However, in the next few weeks I will be moving to a 3 bedroom house with a cellar so might start production and possibly start blogging again.  In the meantime I'm also due to become a new father (Kate hates it when I forget to mention that) so please feel free to come have a look at my new blog about Dad issues http://soontobesleepdeprived.blogspot.co.uk/ and the woman whose made it unavoidable.

In the meantime, stay clean.

The Science of Evasion... Damn you Chemists!

If something has to be done as a matter of importance, it's an imperative with varying degrees of urgency depending on the job type. If a Formula One driver needs to turn left as a matter of urgency then we can usually expect a response from him in a fraction of a second. If a fireman needs to respond to an inferno then odds are they'll be there in 10, maybe 13 minutes (traffic allowing). However, if several emails and 2 voicemail messages are anything to go by, the man I employ to Chemically assess the safety of my products will respond to a matter of urgency in... well, it's been 9 days and still no response.

I suppose chemistry is amongst the most baffling of subjects and those who practice the sciences have every right to lord it over those of us with Humanities degrees (stupid, pointless, waste of time Humanities degrees!) but really, there's basking in your knowledge of covalent bonds, allotropes and the principal causes of Pneumonoultramicroscopicsilicovolcanoconiosis (inhalation of silica dust, obviously) and there's just being rude.

Basically, I can't sell new products if they're not chemically assessed, it's not legal and rightly so; you can't just have any Tom, Dick or Harry making soap and demanding the public smear it on their face it's cause more skin issues than a 5 years old's knife throwing party. I'm not putting people out here, I'm willing to pay them money (in fact, there seems to be a frustrating disparity between the amount of work carried out and the price charged) but all I need from them is a 'Yes' or a 'No, can't be bothered' so I can start bringing BarSoap Moisturising creams to market.

These days I’m not as prone to spouting bygone aphorisms from philosophers and the minds of past millenia. Whilst there is something to be said for learning about the great thinkers, they’re not always the most knowledgeable about the subjects most pressing to the entrepreneurial soap salesman (ever hear Socrates, Dr Johnson or even Nietzsche waxing lyrical about Search Engine Optimisation or Ebay listing fees?) That said, Machiavelli does suggest that ‘whosoever desires constant success must change his conduct with the times’. What a clever clogs!
So, when I say that a substantial proportion of craft fairs I’ve sold at have been, by and large, a waste of time; devoid of customers and, in some cases failing to recoup costs. How should I deal with this? Whilst Machiavelli might console the organizers of such events after all ‘There is nothing more difficult to take in hand, more perilous to conduct or more uncertain in its success than to take the lead in the introduction of a new order of things.’ Personally, I no longer have the inclination to reassure.
One recent notorious example where the close of play revealed a net profit of -£28 (not including an hourly wage) still saw the organizer approach me with an admirable level of optimism to encourage my booking onto their next event. Now, no matter what your level of education, it is patently obvious that -£28 is an unsustainable business model for even the smallest financial concern. So, in light of the single figure attendance to his event I was forced to politely though emphatically decline. I tried to spare a thought for his feelings but, in the cut-throat world of Soapmaking, as good ol’ Nicollo Machiavelli says ‘It is better to be feared than to be loved, if you cannot be both’
As financial concerns become more prevalent (our current speculate to accumulate business model seems so heavily weighted towards speculate I’d equate the monthly outgoing on soap supplies as on a par with a reasonably severe marijuana dependency) I’m looking for more assured Markets that are guaranteed a heavy footfall. To that end, I’ve had to concede that although the official Manchester Markets might have an inflated booking charge, I’ve a much greater chance at recouping losses when there is some chance of a customer walking by as, in spite of the cost, ‘Never was anything great achieved without danger’. To this end, as I peruse a thoroughly depressing financial statement (my bank has even started sending me abusive text messages) I echo Niccolo’s sentiment ‘I'm not interested in preserving the status quo; I want to overthrow it.’
I’m guessing this is a common problem for the majority of sellers just starting out. Certainly I’ve bemoaned a lack of sales with fellow stall holders; we swap success stories and failures and eventually come to the understanding that the more expensive, established stalls are, in fact, less a gamble more a necessity. When it comes to spending money though, it’s an obvious lesson that is the hardest learnt I suppose ‘The wise man does at once what the fool does finally.’

In a manner comparable to Indiana Jones - bloodied though roguish and unyielding - as he returned the 3 Sankara stones to their rightful owners in legendary 1984 documentary The Temple of Doom, I too feel a serenity, a peace... A journeyman's sense of rest as he pierces the fog leading towards the end of lands at those four disparate Atlas points.

What began a fevered rash of alchemy and bone splintering labour has culminated in perhaps the easiest mechanism for any one man to process raw ingredients in solid gold. Now, whilst Gold can be taken as either literal or figurative... I for one find far greater satisfaction in my ability to consistently replicate the perfect Lip Balm that is grounded in Cocoa Butter and a raft of other skin hydrating ingredients (Coconut oil, Olive oil, Vitamin E oil, Beeswax) than that other Fool's Gold; who would smear a Rolex across their parched lips in these arid coming months,? Who indeed would take comfort in the sharp metallic odour of a polished Gold ring?


Indeed, none but a madmen.


Yes, the scent of the Cocoa Butter Lip Balm is nature's true Gold (not the imposter element Au) and you can purchase these divine sticks right... HERE

Interpol have already contacted me suspecting the lip balm may contain Ambrosia, famed drink of the Gods (it doesn't of course, just the finest Olive oil, Coconut oil, Vitamin E oil, Beeswax and Essential oils) Though their interrogation was uncomfortably thorough, they eventually left somewhat satisfied that I hadn't scaled Mount Olympus to unlock the secrets of Zeus. Though I do have to notify them every time I leave the country which is just as well as I've already booked a flight to the city of chapped lips, Sisimut (somewhere in Greenland) where they will worship me as a deity for bringing these lip balm elixirs.

Whilst all the above is clearly steeped in hyperbole, you'd better believe it was I who prevented last week's Rapture (what else could explain it?) and all after striking up a clandestine agreement with St Peter (God Bless him, he just loves Citrus based beauty products) for exclusivity in all distribution rights for my products in the afterlife. Sorry Harold Camping, maybe next time...

Basically, I've no idea why you're still reading this! Head on over here if you just love the fresh, zingy scent of Orange or here if Lemon is your poison. Purchase the finest tube opposable thumbs can manipulate!

A word to the savvy seller, you should never arbitrarily clap your hands together in a fruitless attempt to stop an insect at your stall. The lady who was ogling our wares was completely taken aback, it took some considerable reassurance to convince her that she wasn't in any immediate danger.

Rest assured, she didn't make a purchase though seemed satisfied that I wasn't going to attack her (It was a really loud clap)

Every step an adventure for the travelling salesman...

On the topic of Soaps...

There are two mathematical certainties when one works in city centre:
For the first point, I started to wonder about the last time a stranger engaged me in conversation without wanting money (there’s no evidence, given the clothes I wear, that I have literally one penny to spare) For the second point I initially feel a paucity of emotion given I don’t personally know these people; this rapidly transforms into mild irritation at the publisher’s presumption… That I might care about the bedroom antics of these people? Preposterous. This irritation then descends into mild despair and finally a beleaguered acceptance that clearly a large enough social demographic do care about the movements and activities of these complete strangers.
It’s a complex series of emotions for one man to experience whenever Hello magazine features the unholy trinity of Jordan, Peter Andre and Subject X (Subject X being the person Peter Andre of happen to be sleeping with at that exact minute)
That said, despite my dislike of celebrity interviews and gossip, just recently I’ve found people approaching me (or more accurately, the business) for interviews and articles; what makes us tick, our inspirations; people wanting to understand the life and times of the modern soap maker.
Basically, it’s difficult for a soap maker to spin an amusing tale; I’m not Iggy Pop, there’s only so many soap anecdotes people are willing to sit through before ostentatiously checking their watches and conspicuously mentioning “I’m very bored.”
I’m considering lying about the method of preparing oils; if saponfication takes place at the wrong temperature then the castor oil becomes sentient, a malevolent unusually focused kitchen oil that annexes the other ingredients forcibly… When this happens there’s no other choice but to call upon the Guild of Soap makers to sterilise the area. Obviously it’s still not as interesting as Iggy Pop’s average Friday night but that’s the best I can do. Oh and incidentally, there really is a Guild of Soap makers, I can happily say I’m a member.
For the meanwhile, until I’ve ironed out all the little details in my super-intelligent castor oil fable, I suppose I’ll try to keep interviews light with soap trivia (“Did you know that Roman soap makers employed people called fallones to collect people’s urine to serve as key ingredient in soap? The ammonium carbonate reacted with… oh, bye”) and try to avoid trite and stock answers. Maybe I’ll just send Kate instead.